(ICIS, December 15) – The extent of US soda ash price increases for 2016 contracts is coming into focus, but will not be fully known until January, market participants said on Tuesday.

It is clear that soda ash prices will be higher next year, following recently completed negotiations for 2016 business, sources say.

Large buyers are seeing smaller price increases for 2016 business than small buyers. It is yet unknown, however, what those pricing differences are.

In the midst of a summer in which soda ash demand was strong, most US producers announced prices increases ranging from $11-12/short ton for 2016 contracts. Demand in 2015 has been positive, for the second consecutive year, and the demand outlook for 2016 is equally positive. Global demand growth for soda ash is running between 2% and 3%.

In addition to improved demand, higher rail costs in 2016 are also supporting higher soda ash prices. In the last six years, freight costs have jumped by 40%, while soda ash prices have risen by 10% during that time, a market participant said. 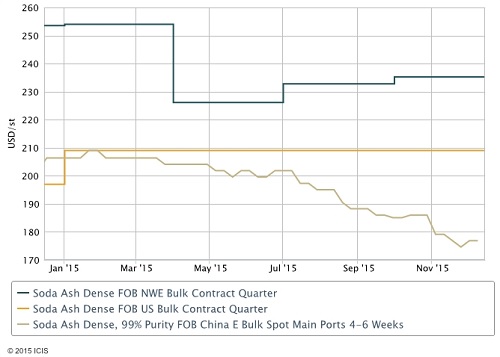